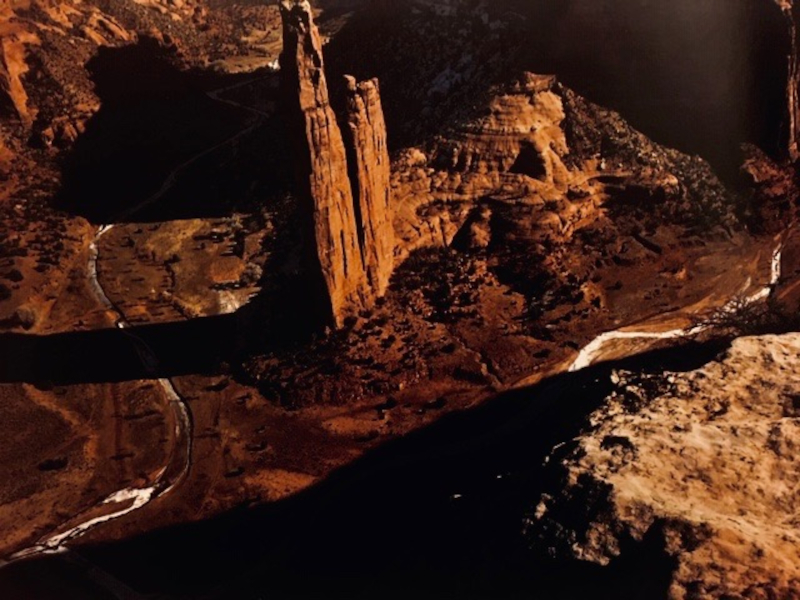 I bought him a Navajo flute in Canyon de Chelly, down below White House ruin. He had played the guitar for years, when one day the music died, and his once-beloved guitar now lay in a dark closet, silent and long forgotten.

It was nearing sunset by the time we climbed back up to the top of the canyon, high above Spider Rock. The late afternoon shadows crawled slowly up its towering ancient form, swallowing the last of the sunlight breathing on the time-scarred red walls. I sat on a flat rock at the edge of the canyon rim, while he made his way down to a ledge far below and stood alone with his new flute, a blurred shadowy figure against the purple evening sky.

As the gathering night settled around us, the song of the canyon wrens stilled, and for awhile there was silence. Then… the faint song of the Navajo flute began to slowly rise up from below, circling, spiraling around me, its haunting notes rising and falling in the still air. A single star hung above us, faintly glimmering, barely there. The notes floated in the dark, echoing in the canyon, swirling up and around and around, until they disappeared into the night. And as they grew more faint, others rose around me, carried upward in the evening breeze.

During the years the old guitar has been silent, gathering dust in the dark closet, there had been no music in our life. But in that moment, as night settled around the ancient canyon, a new song floated around me, gently rising and falling, until finally it was still, and the last notes were carried away into a starlit night.